Top Posts
Chapter 6: The Woman With The ‘Laal Paar...
Chapter 5: Barowari Durga Puja: An Occasion For...
Chapter 4: IPL and Durga Puja Finale 2021-...
Chapter 3: What is the significance of ‘Mahalaya’
Chapter 2: Abar Hobe Bochor Pore
Chapter 1: Durga Maa- A Story Of A...
Tea- An Underrated British India Love Story (“चाय”...
Tales of History #04: History of Passport- Your...
GPS: Grand Prismatic Spring, a Natural Wonder Served...
Chinatown in Kolkata: An Ode to the Chinese...
Wednesday, May 25 2022 - Welcome To Travelature.
Dawn of Durga

Chapter 5: Barowari Durga Puja: An Occasion For All

‘BAR’ means Public in Sanskrit | ‘WARI’ in Persian means For.

The origin of Durga Puja is as old as the myths and legends of ‘Feluda’ and ‘Byomkesh Bakshi’ goes. Let us understand how Durga Puja started as a celebration which in 2021 is considered to be one of the most enjoyable religious events celebrated globally.

Fun Fact: The celebration of Durga Maa is not restricted only to Bengali communities. ‘Maa’ is worshipped by various communities in India such as in the south and the north. We will get into the details in the last section of this article.

So how did it all began?

Legend has it that Durga Puja did not start as a symbol for celebration. It started as a symbol of independence and protest.

It happened when Durga Puja was only confined to the rich and elite ‘BENGALI’s’ of Kolkata. This had resulted in the first public celebration of Durga Puja in Guptipara (Kolkata) when several men decided to oppose the celebration of ‘Maa’ only as a household occasion. The seven brahmins formed a committee and in 2021, Durga Puja is globally celebrated by every section of society. That is why it is known as BAROWARI DURGA PUJA, an occasion for all.

It will be interesting to note that Britishers used to take part in the celebration of Durga Puja. We need to understand that the British were traders first and conquerers second. To blend in, there is historical evidence where their presence has been either photographed or documented. (You can check below)

The first grand worship of Goddess Durga in recorded history is said to have been celebrated in the late 1500s. Folklores say the landlords or zamindar of Dinajpur and Malda initiated the first Durga Puja in Bengal to demonstrate their social prestige, political power and wealth.

The first public Durga Puja celebrations can be traced back to 1583 in Bengal, northeast India, where the Zamindar (landlord) of Tāhirpur named Raja Kangshanarayan organized the first Sharadiya or Autumn Durga Puja in Bengal and invited everyone in his jurisdiction and beyond to witness the grandeur of the Durga Puja.

It was in this very year, that the first family Durga Puja started in Kolkata, that of Sovabazar Rajbari by Raja Nabakrishna Deb.

The first Durga Puja in Belur Math was held in 1901 by Swami Vivekananda himself. Initially, celebrated inside a small pandal, the Durga puja at Belur Math now attracts thousands of people every year.

The years above are not implying to take you for a ride of a nostalgic history lesson. The origin of the celebration of Durga Puja is a bleak picture of history. In the past, India was an economically plundered nation with many mouths to feed. Durga Puja started as an occasion where the poor, the sad, the depressed and the betrayed can smile again, together, for a few days. This is because of HOPE.

We believe that HOPE runs the world like gravity keeps the planets in place. Durga Puja is a symbol of hope for us. Hope for Durga Maa to bless us of our worries and pain and substitute it with the strength to fight till ‘Maa’ comes back to bless us again.

Historical Evidence-1: Europeans being entertained by dancers and musicians in a splendid Indian house in Calcutta during Durga puja (the 1830s–1840s). Image via Wiki Commons Historical Evidence-2: Britishers attending the festival of the Goddess Durga at Calcutta (the year 1859). Image via Wiki Commons 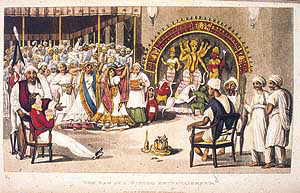 ‘Maa’ is a universal term then why not Durga Maa?

People confuse that Durga Puja is a festival meant only for the ’Bengali’ community which is not true.

Durga Puja is a Hindu festival that is celebrated by people from West Bengal, Odisha, Bihar, Assam and Tripura.

Durga Maa is regarded as ‘Shakti’ and Navratri is celebrated in her memory in West Bengal. A nine-day celebration, Navratri in Tamil Nadu is equally a grand festival as it is in other parts of the country.

After Chhath puja, Durga puja is the second major festival of Bihar. Here, it is celebrated for ten days. People perform fasts during the festival. The married women perform ‘sangha’ which means sandhya aarti and “khoecha” is given to goddess by women. It is a common tradition in Bihar that when a daughter comes to her father’s house ‘khoecha’ is given to her by her mother. It is believed that goddess Durga comes to her maayke from her Sasural every year.

Indians who are based in foreign countries celebrate Durga Puja on foreign soil till today. In India, several magnificent, hand-crafted idols of Durga Maa are exported to the west every year. The festival of Durga Maa brings joy to every individual.

The universal attribute of every individual who sheds a tear when ‘Maa’ leaves symbolise a unification of our cultures and traditions.

Our traditions and cultures teach us the path to stay together but sometimes we take it to be the reason for our differences.