Top Posts
Chapter 6: The Woman With The ‘Laal Paar...
Chapter 5: Barowari Durga Puja: An Occasion For...
Chapter 4: IPL and Durga Puja Finale 2021-...
Chapter 3: What is the significance of ‘Mahalaya’
Chapter 2: Abar Hobe Bochor Pore
Chapter 1: Durga Maa- A Story Of A...
Tea- An Underrated British India Love Story (“चाय”...
Tales of History #04: History of Passport- Your...
GPS: Grand Prismatic Spring, a Natural Wonder Served...
Chinatown in Kolkata: An Ode to the Chinese...
Friday, January 21 2022 - Welcome To Travelature.
Dawn of Durga

Chapter 1: Durga Maa- A Story Of A Woman That Inspired Billions

The story of Durga Maa is not just a legend but a tale to inspire, empower and motivate hundreds and thousands of women all around the globe. This article is not just going to be about a Goddess who had protected the world against a raging Asura. This is a short tale about Durga Maa who has been a part of our life since her origin on this beautiful land of ours.

The legend has it that Mahishasura, a mortal and a devotee of Lord Brahma, through his extreme dedication, was able to prove his devotion towards Lord Brahma. When being asked about his greatest desire, Mahisasura asked for Immortality. Lord Brahma, the creator of the universe, was able to foresee the lust behind the devotion of his devotee. Mahishasura was denied, eventually. Although he was granted the blessing of being immune to any ‘animal or man’ in this mortal world. This had marked the beginning of a decade of torment, torture and carnage among the mortal beings.

Mahishasura was so enraged by his ego that he presumed no Woman on this earth can dare cross paths with him and his boon protects him from the other half of the gender, literally making him “Immortal”. He ended up attacking the realm of the Lords i.e the Devlok and was on his way to overthrowing Indradev, the Lord of the God-realm, according to Hindu mythology.

This movement of ego and power forced the three Gods of Unity to rage a war against Mahishasura. It was Lord Vishnu who came up with the visionary idea of defeating Mahishasura with an entity that will inspire generations. The three Gods, Lord Vishnu, Lord Brahma and Lord Shiva, decided to defeat his Male ego with the blunt of a Woman. This led to the creation of Durga Maa who was formed by the combined powers of the ‘Trimurthy’.

Now, who are the Trimurthy? 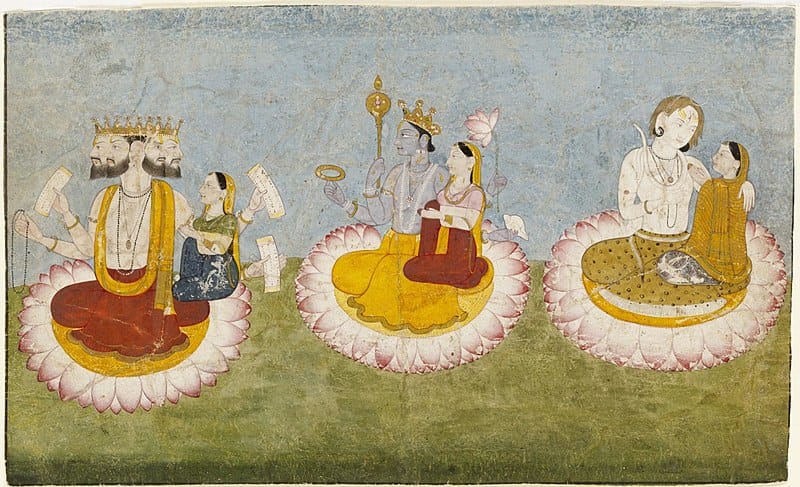 History has it that the universe is created by ‘SHAKTI’ which in modern times is recognized as gravity. Every force like the gravitational pull needs to be controlled and this led to the formation of the ‘Trimurthy’.

The creator of the universe, Lord Brahma.

The preserver of the universe, Lord Vishnu.

The destroyer and the protector of the universe, Lord shiva.

The trimurthy are not the king of Gods and Asuras but are silent guardians who have been preserving life on earth and this universe through various incarnations. Their blessings are received through hard penance and once received, the individual is counted as a legend by the Gods and Asuras. History has several examples like Raavana and Mahishasura who had proved their devotion for the Gods through hard penance and devotion.

It is important to understand that sometimes even the Trimurthy fails to predict the consequences of their actions. In those situations, they either decide to incarnate themselves to reach ‘Mother earth’ or they combine their strength to create a living entity. The story of Durga Maa starts with the Trimurthy.

The symbolism of feminine strength:

The Great Goddess Durga considered as the feminine epitome of strength slaying the Buffalo Demon (Mahishasuramardini). Image via PICRYL

They say Durga Maa symbolizes the combined blessings of all mothers. We believe in the tale of Durga Maa who symbolizes the power and glory of a woman. The world can never be dominated by one single gender and that is why we have Durga Maa. The wrath of Mahishasura symbolizes male ego which was only subdued by a female entity, restoring balance and peace around the world.

India is blamed to be a country that worships Goddesses but restricts women. Times have changed. In 2021, Indian women are crossing barriers in every field, bringing glory to our land. Indeed, perfection is yet to be attained but it should not be forgotten that the legend of Durga Maa was written decades ago. This is a clear indication that our forefathers knew the importance of a balanced eco-system where Men and Women should be treated equally.

The tale of Durga Maa is not just a myth or a legend. It’s a tale that says when the world is dominated by one particular gender, chaos follows. It’s a tale that gives hope to every mortal that every year when our lives get difficult by the influences of our own Asuras, ‘Maa’ will come and wipe our woes while she leaves us only to get back next year.

The two sides of Mahishasura:

Durga Maa is a Mother, a Female, a Woman who fought not just against Mahishasura. ‘Maa’ fought against every individual who did not believe in the potential of a Woman. The tale of Durga Maa metaphorically reflects that there will always be men like Mahishasura, bringing shame to the dignity of a woman.

The tale teaches us that there will always be Men like Lord Vishnu who understands the potential and power of the presence of a Woman in a society. Our society can only excel when every individual, irrespective of his/her gender identity or sexual inclination is treated equally.

We believe in variety. We Understand that this article was nothing like our previous content. This article was typed for bringing a change. The story of Durga Maa from a common but different perspective is one of the first of its kind in terms of woman empowerment. If you liked this article then buckle up for an entire series based on Durga Maa. Let us know if you have any suggestions for topics, and if we come to a mutual agreement, you can be a part of our next article. Do not hesitate to reach us through Twitter, Instagram or Facebook.

If this article made any sense to you, let your friends know about it and follow Travelature.

Chapter 3: What is the significance of...